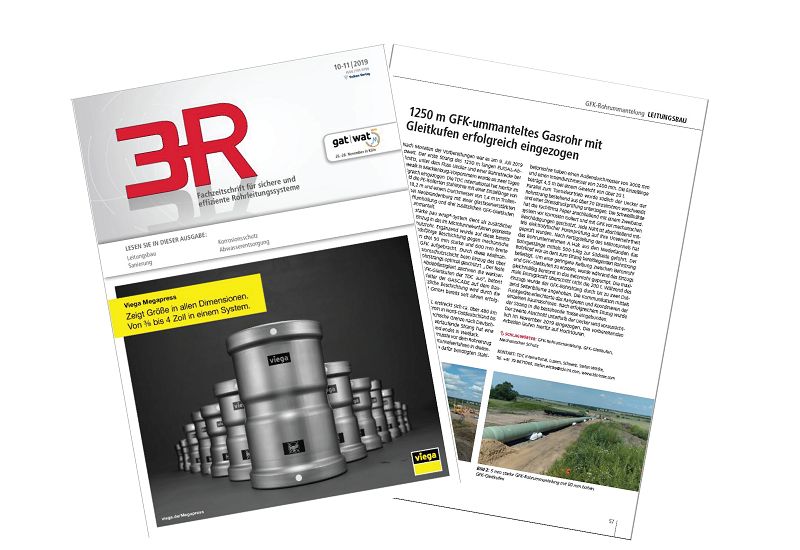 In the October-November edition of 3R – Fachzeitschrift für sichere und effiziente Rohrleitungssysteme, a leading German pipeline journal, an article was written about TDC International and its involvement in the European Gas Pipeline Link (EUGAL) project. As previously reported, TDC International has been actively involved in the EUGAL project. EUGAL is expected to start flowing at the end of 2019, will receive natural gas from the planned Nord Stream pipelines and is intended to strengthen the supply of natural gas to Germany and Europe.

As stated by 3R, the first part of the 1250 m long EUGAL section, which crosses under the river Uecker and a railway line near Pasewalk in Mecklenburg-Vorpommern, has been successfully installed. TDC International used its proprietary GRP protection system, pau wrap®, to coat the up to 18.2 m long steel pipes of diameter 1.4 m (DN 1400). In addition, three GRP gliding spacers were encased per pipe.

The 5 mm thick pau wrap® system serves as additional mechanical protection to the pipeline and its anti-corrosion base layer when dealing with trenchless micro-tunnelling processes. The protection layers ensure that the 1,200t heavy pipeline has enough protection when being pulled, in the cement casings, until it reaches its final destination. Stephan Ehwald, GASCADE site manager for lot 3 & 4, emphasises “The pipes solid fit and high abrasion resistance characterises TDC International’s gliding spacers.”

Are you interested in reading more about EUGAL? Check out the the full article in German here.